This wiki page describes how to setup a system capable to realize indoor autonomous flight. The system is based on a quadcopter with a Raspberry Pi 3 and a Raspberry Pi Camera Module v2. Images from camera are used to calculate poses estimation on the Raspberry Pi and the result are sent as mavlink messages to the Flight Controller. The camera is downward looking and on the floor there is an Aruco Boards like this: 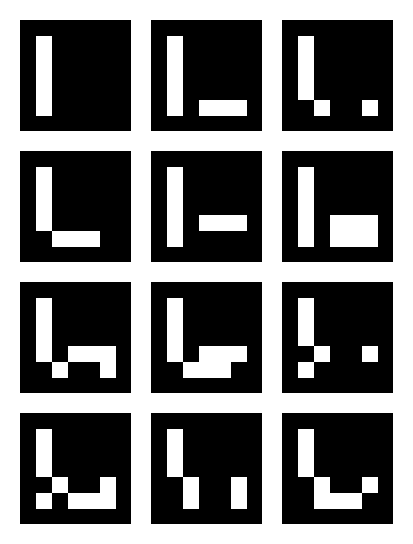 The system uses ROS for all the tasks it has to do. The images from Raspberry Pi Camera are captured by raspicam_node, the poses estimation are calculated by a modified version of aruco_gridboard and the relevant messages are sent to the Flight Controller using mavros. All this ROS packages, and other we will see later, runs on the Raspberry Pi 3.

The ROS node raspicam_node publish camera/image and camera/camera_info topics, the node aruco_gridboard subscribes to these topics and publish a camera_pose message to the mavros/vision_pose/pose topic, mavros translates ROS messages in mavlink messages and send it to the Flight Controller.

The messages SET_GPS_GLOBAL_ORIGIN and a SET_HOME_POSITION are sent with a script before starting to use the system.

Components of the System¶

Instructions to reproduce the system¶

Detailed info on the relative wiki page on Ardupilot site.